In the aftermath of a devastating earthquake, and trapped in a rapidly flooding structure, a crew of six stationed on an underwater research facility realize their only shot at survival lies in walking across the ocean floor to a distant abandoned rig. In addition to the physical challenges of the journey they quickly discover they’re being hunted by mythic, monstrous sea predators hellbent on killing them.

Working as the lead vendor for “Underwater”, MPC Film’s VFX Supervisor Axel Bonami led the teams in Montreal, London and Bangalore, completing more than 400 shots. They created the full journey on a dry-for-wet shoot– from the submerged base, the whole pipe connecting to the Kepler Station, down to the ocean floor, through miles of underwater desert, cold dark landscapes and to the final act at the main Roebuck station. MPC built all external assets outside of the underwater station.

Axel Bonami, an experience scuba diver himself, had just wrapped on Ghost in the Shell and knew exactly what the soup of a dark deep underwater experience was.

The shoot took place on dry land and MPC Film had the difficult challenge of making every frame appear as if it were shot underwater. In order to keep the atmosphere of the murky underwater environment on set, and to keep the actors immersed, black screens were used instead of green screens. There actors wore underwater suits with the visors removed and there were practical props and sets for the actors to interact with. The shots outside the Roebuck station have fully computer-generated environments in which CG visors were inserted later. MPC built CG drills, elevator, escape pods, cranes, platforms and cables for the exterior of the station.

Because of the dimly lit set, the VFX team used LED tracking markers and illuminated ping pong balls for tracing and adjustments. Enormous attention to detail was needed to create the look of the CG water. Photorealistic bubbles, debris, silt and algae were crafted to give the feeling of extreme depth and claustrophobia. MPC’s R&D team focused on upgrading particle shading because of the amount required in shaping the underwater shots. 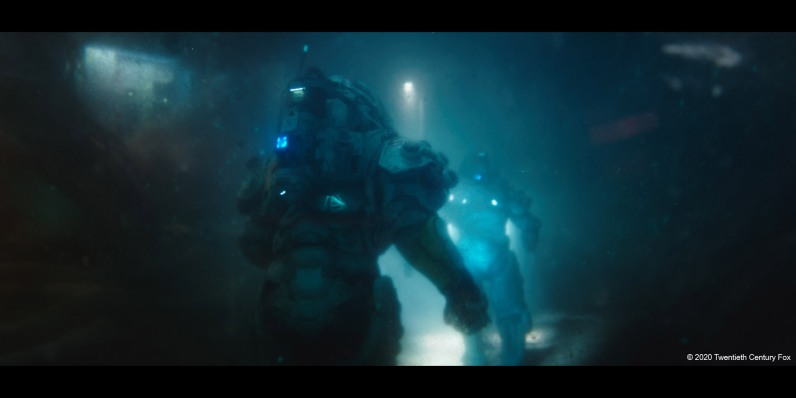 MPC Film’s Character Lab created the Behemoth, a 700-meter-long deep-sea monster, who later is joined by thousands of other creatures. The Clinger is the main creature that hunts the humans; its design resembles that of an elongated ghostly biped with pale, translucent skin. The designs for both creatures were based on concept art, but various sea life and deep-water creatures were used as a reference for the realistic look of the skin qualities and detailing.

The scene that posed the most complex challenges for MPC’s artists was a sequence where a cargo lift crashes to the ocean floor, collapsing a maintenance tube. This scene was particularly complex because of the CG underwater environment being incorporated during the collapse and the addition of fiery elements of the damaged tube. The combination of large-scale photorealistic water effects, crafting a feeling of underwater claustrophobia and the addition of the monster covered in parasites proved a multilayered challenge for MPC.