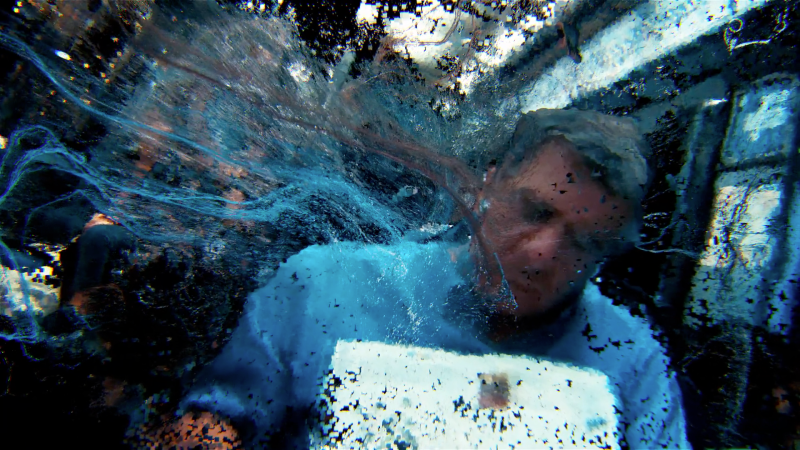 Art Director and filmmaker Benjamin Bardou has created a series of astonishing short films that explore the space between our everyday lives.    Each setup explores a train carriage in Paris, crowded with people.  But the air, their skin, and, well, everything is fluid.    I contacted Benjamin to hear more about how he devised the visuals.  Bardou is a matte painter living in Paris. At the office of Mikros Image, he works on feature films, commercials, and music videos, and has also focused mainly on new visuals and out of the ordinary experimental works.  He is very interested in the theory of montage and a lot of his frames are influenced by Walter Benjamin’s work.

For a full sample of the shorts, have a look at Benjamin’s site at this link. It is quite amazing.

First Contact, the short from the Megalopolis project (above), is a dreamscape created in enclosed human space, generated from a walk through a crowded train or tram interior in Paris.  One of those nights when you are so so tired coming home from the office or a really, really good party.    The camera or viewer moves through, and the soundtrack takes over, merging an idea of a public unaware of an alien presence.

The pixels and parts of the contours of the screen’s elements are manipulated and coerced into motion, even though the whole visual plate is a still frame.  Bardou works mainly in ClarisseFX and Maya but for this project series, he utilised Unity and Blender.

Megalopolis is a project that deals with the big modern city using a photogrammetry technique, a theme that has interested Bardou for a very long time. He says the city is an enigma that needs to be decrypted. “It is through contact with writers and artists such as Baudelaire, Meryon or Walter Benjamin that my urban observation was forged,” says Bardou from his native Paris.
“In a certain way I am inspired by an aspiration of Baudelaire made to Arsène Houssaye in 1869 in his preface to the Spleen of Paris:
“Who among us has not, in his days of ambition, dreamed of the miracle of poetic prose, musical prose without rhythm and rhyme, flexible and jarring enough to adapt to the lyrical movements of the soul, the undulations of daydreaming, the jolts of consciousness?”

In its streets, several eras overlap. In the shops, train stations or other places of passage, architecture refers to a mythical past but it can also bring the hope of emancipation for the masses who cling to it. For those living in these places, the city appears both as hell and as an ideal.

Megalopolis deals with these different states through several films. Each film is a kind of urban poem.
“From the start of the project, I didn’t want a classic narrative,” he says. “My interest lies in film editing, in the way in which one can create images in the minds of the spectators through the contact of two images or several heterogeneous elements. Bardou quotes the poet Pierre Reverdy, in that ‘the more distant and accurate the relationship between the two close realities, the stronger the image will be.” This idea, taken up by Godard, embodies his method of working on this project. Bardou’s aim is to work with historical materials but also with simple urban prosaic elements to penetrate and touch the collective unconscious. “How can these buried images of lost paradise be brought back to the consciousness of an entire society? This is the very ambitious and senseless project that drives me,” he says.

“Personally, I prefer to spend time experimenting with a technique rather than spending time explaining how I proceed. I don’t really know it myself.”

Themes in his other works include a walk through a tight city street in Osaka at night, another uses a drone shot looking down into some Paris streets at night.   Another explores the interior of the Chartres Cathedral.

Benjamin Bardou’s work is broadcast regularly in various festivals and exhibitions around the world.