A look at two studios working on VFX for Marvel’s Spider-Man: Far From Home.

Twenty four VFX studios, world’s apart, worked hard on the newest installment in Columbia Pictures’ and Marvel Studios’ hit superhero action-adventure.
Scanline VFX delivered more than 100 visual effects shots for Spider-Man: Far From Home, one of this year’s most anticipated films and a continuation of the successful reboot of the Spider-Man character in the Marvel Comic Universe.

Directed by Jon Watts, Spider-Man: Far From Home is a sequel to 2017’s Spider-Man: Homecoming, also helmed by Watts. The new film is set in the aftermath of Marvel Studios’ mega-hit from earlier this year, Avengers: Endgame. While he is grieving over the death of Tony Stark, Peter Parker goes on a European break, where he meets a variety of characters, both good and bad. Big and small. Wet and dry. One is in the form of a white water strongman, entirely built out of water, and several hundred feet tall. ScanlineVFX artists built Hydroman in stages.

To simulate Hydroman, Scanline VFX used an underlying biped model as a base, but since he is formed from Venice canal water, instead of having legs, his shape blends back to the canal below his hips. This underlying mesh was used by Scanline’s in-house simulation software Flowline, to define where the fluid needs to be. The simulation engine within Flowline made sure the water was always surging around in a vortex, which, in its centre forms Hydroman.  There were multiple different simulations needed to create a typical shot, but it always followed the physique of a humanoid shape.
Artists could use this mesh to help guide the water, define where it would build up or how quickly it flows, while simulation always tried to keep the water close to the aforementioned shape.

“Even before the shoot, Scanline VFX had some pretty good previz for most of the sequence, giving us a good idea of what the shots should finally come to look like,” said Julius Lechner, VFX Supervisor for Scanline VFX. “Production VFX Supervisor Janek Sirrs helped to come up with this new way for Hydroman to die. In the story, Mysterio pretends to be from a different dimension, which gave us a good base to be creative about Hydroman’s death. Also, we were pretty free in defining the angles and actions for the sequence on the square, which was a lot of fun for us.”

“We were wanting the water to actually come up from the canal, rush up Hydroman’s outer shape, and run back down inside him,” he says. “But with all this water accumulating on Hydroman, we had to find additional ways to make sure the volume of this digital water was able to then vent back to the canal, without being too obvious.”
The lighting around the location at the Rialto Bridge in Venice was really nice at that time of the day. “As far as Hydroman was concerned, we tried to find a balance between matching that lighting, being consistent through series of shots and using the light to bring out interesting visual qualities of the water.”

“To save rendering time, we pre-rendered HDRIs of our digital environment from his position in the shot. These were then used to light Hydroman and eliminate expensive bounce-light calculations of the surrounding buildings. This was just one element of a massively complex fight scene. It’s always very important to plan out each and every step in a complicated scene like this. So you always need to know what asset is destroyed and at what time, and it’s also key for everyone working on it. We start with analyzing the sequence for the damage being done to boats and buildings for example. This information is then fed into the pipeline so everyone knows about those milestones in the choreography. That way we can make sure those rendering the frames know they have the correctly damaged buildings and they don’t have to worry about continuity issues.”

Meanwhile, on the other side of the planet, Rising Sun Pictures was constructing a comparable number of shots to Scanline. The studio’s work included a memorable holographic sequence that reveals one of the film’s biggest mysteries: the origins of The Elementals, four monstrous creatures from a parallel universe with the ability to control fire, earth, water and wind. 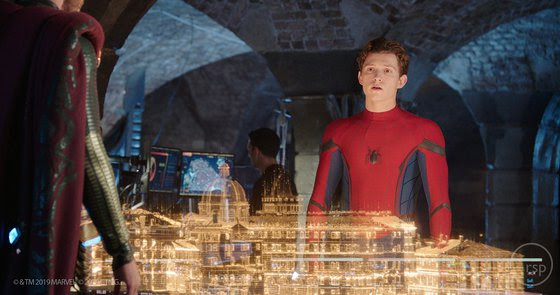 RSP’s most complex work for Spider-Man: Far From Home involved a scene set in Quentin Beck’s subterranean bunker in Venice, where he invites Spider-Man and Fury to explain the existential danger posed by the Elementals. Beck plays a hologram depicting the creatures’ origin in a parallel dimension, their involvement in Earth’s distant past and their role in the destruction of his home planet.
RSP’s team created visuals for the scene to match the story told by Beck. In it, the extradimensional Elementals are shown as having emerged from black holes. To bring that to life, artists drew inspiration from the latest scientific hypotheses regarding the appearance and behaviour of black holes, as well as previous depictions of the phenomena in Marvel films. “Visualising black holes was immensely challenging, both creatively and in terms of rendering it out,” says RSP VFX supervisor Tom Wood. “We combined the latest theories from physics—how black holes distort light and time—and brought that into the dynamism of the Marvel Cinematic Universe. We also had to consider what audiences expect from black holes. The design process involved a delicate balance.”
The hologram goes on to depict the Elementals as having a hidden role in Earth’s past, connecting them with pagan gods associated with fire, earth, water and wind. For that sequence, artists studied ancient statuary and totems. “We did extensive research into deities associated with the primal elements,” recalls CG Supervisor Ryan Kirby. “Our CG department created elements based on artifacts from Japan, Hawaii and other parts of the world.” 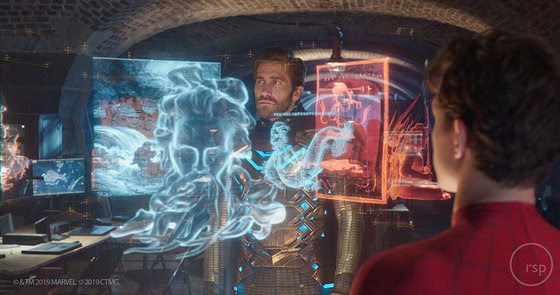 The studio’s 2D department was tasked with added effects, compositing live action and CG elements, and finalising the sequence. “With elements being generated by layout, FX, look dev, lighting and comp, it was essential to keep everyone involved in the process on the same page,” notes Head of 2D Jess Burnheim. “If there was a change made in one department, it had a knock-on effect with everyone else. Everyone supporting the creative vision was key.” 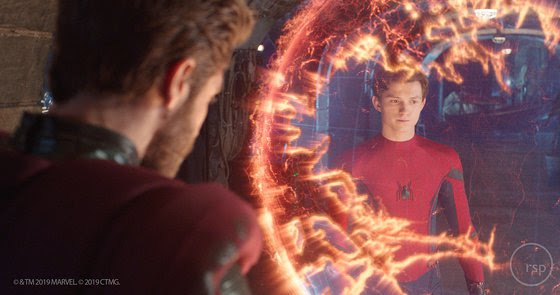 The sequence ends with Beck’s planet being consumed in fire. All this imagery had to be further processed to give it the ephemeral look of a hologram. In the context of the scene, the hologram is projected from a large table with Beck, Fury and Spider-Man standing alongside. In many shots, the actors can be glimpsed behind and through the holographic display. “We used volumetric renders to make the imagery appear to hang in space,” explains Wood. “The table itself presented a further challenge. It was essentially a lightbox that lit the faces of the actors. We had to get rid of that light, dim it or add layers to it so that it conformed to changes in the hologram.” 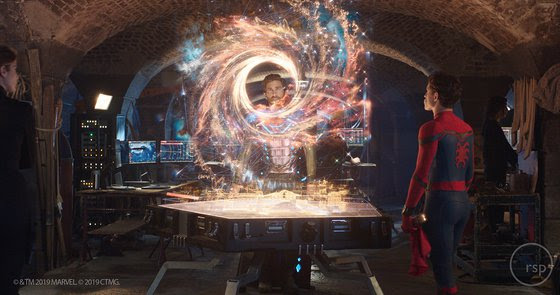