The Eagle has landed

**UPDATE** The 2019 Oscar for Visual Effects goes to DNEG and the VFX crew headed up by Paul Lambert.

Overall VFX Supervisor Paul Lambert has joined Director Damien Chazelle and lead actor Ryan Gosling in Universal Picture’s First Man, hot on the heels of DNEG’s work on Blade Runner 2049. This is the truly riveting story behind the first manned mission to land on the moon, focusing on Neil Armstrong and the decade leading to the historic Apollo 11 flight.

Told from the perspective of the man in the middle of the tornado called the Apollo program, and based on the James Hansen book, the film traces the ten-year lead-up to the most dangerous mission in history.

I caught up with Paul Lambert as he finished work on the IMAX version of the movie in Vancouver.  He told me about the challenges he found on board this adventure. He tells me he tried to keep the visuals as real and practical as possible, yet as it is a space movie, there were aspects where he couldn’t work without computer graphics. 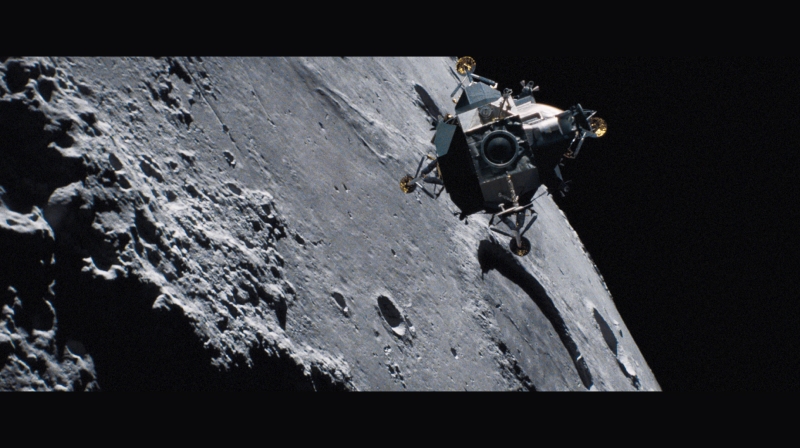 “Since this is a movie shot partially in space there is always going to be visuals that have to be created with computer graphics,” Lambert explains. “We had to create a gentle balance using a diverse mixture of visual effects, special effects, archival footage and scaled models to help create the 1960’s documentary-style film that was Damien’s vision.”
For instance, when they finally land on the moon, the challenges were multiplied, as the visual conditions were immense. This long sequence was shot on a deep quarry just outside of Atlanta, dressed to match the landing site of Tranquillity Base on the Moon.
“As both astronauts had a gold face visor, it kind of worked like a chrome ball on set,” explains Lambert. “You could see the IMAX camera, the crew, everything. In fact, there was nowhere to hide. So we had to recreate the reflected lunar site digitally and patch it onto each visor in shot.”

Nathan Crowley the Production Designer had carved the base of the quarry into a very impressive moonscape. They had to remove gravel mounds both practically and later on and extend the horizon. The art department on location did an incredible job of dressing the moon sets while keeping footsteps to a minimum, but with that many crew, working for so long, there were going to be footprints all over the place.

Lambert tells me the quarry moon site was very much a physical setup in that, “we wanted to do a lot practically, use visual effects sparingly. Damien [Chazelle] wanted to capture all the moon scenes so that it felt different to the other 16mm and 35mm production footage, with the IMAX camera,” he says. Chazelle has spoken to many of the Apollo astronauts who walked on the moon and they speak of hearing more, seeing more and being in a state of heightened awareness. IMAX was the only way to bring that extra reality. “We had a bit of a Wizard of OZ thing going there, like from springing from B&W to color,” he says.

In addition to the visor and the footprints, the two actors were bouncing around the full-size Lunar Module while being suspended lightly by cables, to simulate the one-sixth strength lunar gravity. At one point, the real Moon rose out in the lunar sky. It also snowed on the set, bringing production to a temporary stop.

Meanwhile on the real moon, there is just one light source in the sky (the sun). However, there is still a lot of light bounce from the dirty grey surface and the big blue ball of the Earth sitting in the black space above. The principle for recreating this is to use the smallest point light source and having it as far away from the set as possible, to avoid the spread in the shadow.

Linus Sandgren, the Cinematographer, had a manufacturer build a light bulb which was 200,000K watts. The strongest film light ever made. It took a long time to build, forever to get to the set and it was fifteen foot long, and thankfully he made two. “Attached to a crane as far away as possible, it threw a light so immense, it was a shadow I’d never seen from a film set before,” describes Paul Lambert. “It retained such a sharp shadow, and it worked for about an hour and then it blew up. The second one lasted a little longer and then we went back to two 100,000K stacked together.” 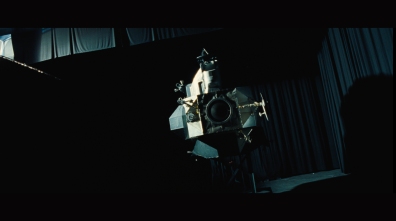 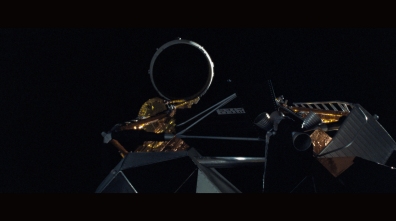 The art department built a partial full-scale Apollo 11 Lunar Module to go on a gimbal rig. There was also the full-size Gemini 8 capsule and an X-15 cockpit for the experimental jet. The Heads of Department had a guiding principle so everyone knew where they were. “If we were shooting inside one of the crafts for close-ups, we would use that full or large scale build,” he describes. “If we were to create a mid-shot, out came a miniature. We had each one built at one-sixth scale and also a model of the huge Saturn V launch rocket at one-thirtieth scale, which was still about forty foot high. Anything in the background could be built as a CG model. And there were times when it was a bit of a mix and match.”
During the Apollo docking sequences, the crew worked with the large-scale Lunar Module model, but because there was very little space, they didn’t put the legs on it. They ended up being added in CG but this wasn’t the rule.

Cinematographer Linus Sandgren has worked on such rich productions like American Hustle and La La Land, where color treatment and finely dated elements on screen define a certain time and place. He tested for First Man on 16mm and 35mm film and shot scenes in a documentary style, which was quick paced, off the shoulder. [The Earth-based scenes]

Paul Lambert as VFX Supervisor was always trying to source the lens settings of those shots so he could work with this data to create any required effect for tracking but the use of zoom lenses limited the amount of info obtained. “But it was never going to happen on this production”, he says. “There are even shots in the film, which came from rehearsals. They’d find a good angle and they’d quickly take it.”

Lambert and Sandgren did so many tests with the film cameras for First Man, in so many scenarios. “There were various push-pull processing tests for film for example. It does vary for different scenes in the movie. There was an extraordinary amount of time at the beginning of the production trying to decide what the actual look was going to be.” 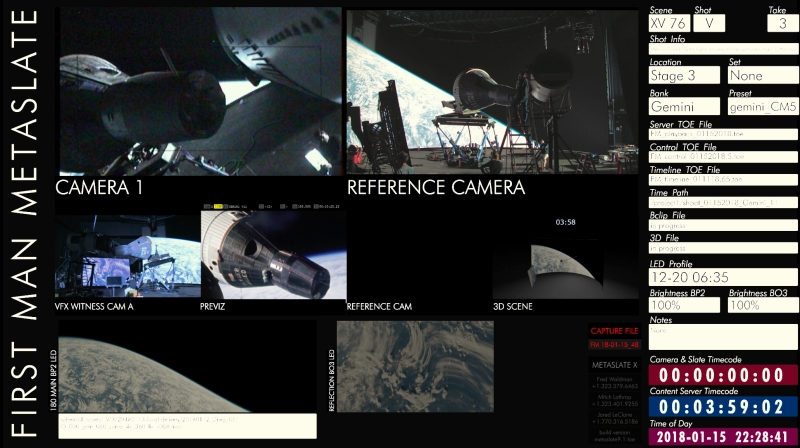 The results from the LED wall was so impressive, yet the content required more than a side view or front on. They needed a spherical 360-degree coverage for the viewpoint of not only the X-15 flight but the Gemini 8 episode as well, showing Earth from close orbit. This event was where real-life astronauts Scott and Armstrong found themselves in a virtually uncontrollable spin. Tipping end-to-end and spinning, a booster jet malfunctioned while docking with an Atlas Agena target vehicle in orbit.

Read about the real event:

Lambert tells me when they had this spinning display on the LED wall during filming, most of the crew had to keep their eyes averted from the screen. Those who didn’t look away were quite sick. “That scene proved the practicalities of having the view from the cockpit available on set. While keeping the front of the Gemini craft on the gimble, it allowed us to light the actor, get his reaction, and build such a real experience.”

The Vancouver-based VFX Supervisor then tells about building a 35-foot tall, sixty-foot wide LED wall which would display what is available to the Armstrong character when he’s inside the Gemini, Apollo or the X-15 test jet. Of course, there is then practical lighting from the effects on the face, in the eyes and on the visor. Ryan Gosling has true visible effects to act to. [This is similar to the technique adopted by VFX Supervisor Rob Bredow and his SOLO crew over at the Lucasfilm studios for the Maltese Falcon going to ‘hyperspace’, yes with SOLO it was rear-projection.] Director Chazelle wanted to shoot entire sequences with this LED screen. In this First Man production though, most of the in-cockpit footage is captured on 16mm film.
The same rig was used for the Gemini launch sequence and the all-important Apollo launch, approach and landing on the moon. “The guiding principle was to try and do a lot on the set,” describes Lambert. “In fact, with this production, there was no use of any green or bluescreen technique at all.”

They had about six minutes of footage to play on the LED screen. When Armstrong is dropped from the B-52 bomber in the X-15, Damien could play the LED footage in the shot for as long as he needed. This would fill the cockpit with the true light of such a venture. Lambert went up in a private jet to collect footage for the LED wall, showing clouds and certain ground features. “Firstly, it’s very hard to get a pilot who wants to fly through clouds,” he says. “In the end we went for all-CG cloud setups, and rendering full-360, spherical VR content for the X-15 sequence. We also kept and used helicopter footage from aerial DoP Dylan Gross for the mountain ridges that appear in some shots from the X-15 jet.
The playback system for the LED wall allowed the crew to rotate the images or even animate them during a shot. Imagine if you will, rendering for everything flying straight, then stretching everything for an angle shot, just for the light hitting the actor’s face. “This was especially useful for the approach to the moon as the Lunar Module pivots around for the de-orbit,” describes Lambert.

The LED screen effect had an immense amount of testing before committing it for use. The pitch of the pixels of the LED screen had to all be worked out because they were shooting through an open point in the LED screen. If they focused too closely on the screen, they would pick up a moiré pattern. “The film capture would get away with a whole lot more than the Alexa digital because of the inherent grain of film,” Lambert adds. “I know a lot of stuff was done for interactive light and diffused reflections, but the fact is we could keep the content on the screen instead of replacing it whenever we saw it directly through the camera.”

At the launch of the Gemini 8 mission with Scott, there is a closeup of Armstrong’s [Gosling] face. We have a sense of the gantry pulling away, merely from the reflection we see in his eye and his visor. The shot follows them through the clouds, then into the blue, darker and darker, until apogee is realized.

During many of these major launches of the day, there are multiple cameras placed at strategic points, recording the machinations of this complex, explosive engineering feat. If there was an accident or unexplained malfunction anywhere, these cameras would be capturing what happened, basically from every angle possible. First Man’s VFX producer Kevin Elam went to the archives and found a massive version of a Saturn V on its launch, (actually Apollo 14). They composited this clean closeup onto a CG wide view of Cape Canaveral from the sixties, specially created for the scene, matching the aged film look to the entire frame. They repositioned the restored footage in the centre of frame, and then extended either side using CG or matte paintings. At the core of those scenes, they retained the original material.