Inspired by events hidden in Australia’s dark and mostly unknown history, Sweet Country is a story set in the tough outback of the Northern Territory of Australia.  This is a simply told story from 1929 about the Indigenous people torn between first-people culture and the wild west subsistence farmers making their way through each season. Told in the genre of the period western, director Warwick Thornton saw this as the most effective way to convey the story.

“My aim has been to draw the audience into this world and to experience the issues faced by an occupied people,” Thornton says. “This immersive approach is designed to break down the cultural boundaries between us and bring us together.” 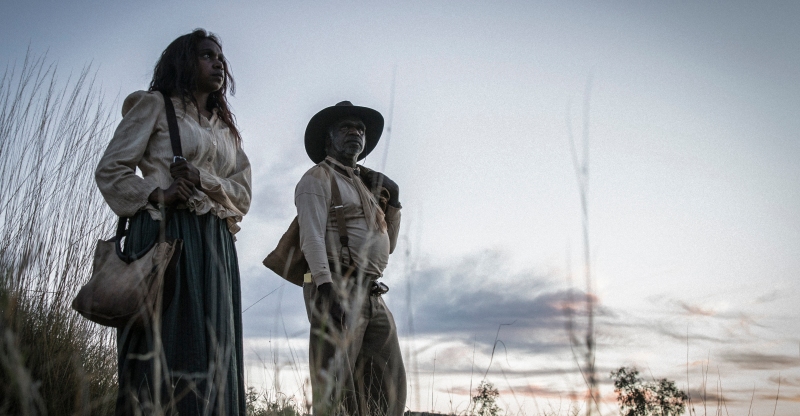 Thornton’s direction stays true to the cultural pace of the indigenous sensibilities.  Hamilton Morris underplays the Aboriginal stockman, Sam.  Yet his story is played through every line in his face.  The horror of his story, the honest duty and purpose in his actions, all endear his character to the audience.   In telling this tale, as well as being the director, Warwick Thornton was also the cinematographer on the production.

Thornton’s cinematography is full of thoughtful slow tracking shots through the low whispering underbrush.  The dust and wildness of the landscape is almost palpable, shot in the magnificent MacDonnell Ranges around Alice Springs in central Australia where Thornton grew up.  Then there are the characters.  Each is so dirty, full of dust, grit, and sweat.   Hamilton Morris is an Aboriginal stockman with a young wife and niece to take care of. His situation rolls quickly out of control, through no fault of his own.

Bryan Brown plays Fletcher, tough-as-nails, a robot of a police sergeant.  This is perhaps a little type-cast but it is the perfect fit for Brown.  Sam Neill also plays to type as the softer kindly landowner, in charge of the stockman and his small family.

Neill plays the long-suffering yet bravely independent Christian land-owner, Fred Smith.  While his religious strength is honest and means well, he is almost naive in the face of what occurs.  His impotent ineffectiveness is telling. But when there is no keel to guide, society is left traumatised and directionless.  The story echoes the gaping chasm displaying the lack of understanding between communities throughout Australia over the years.  While surrounded by the rich, harsh outback, drunk justice is dished out by disoriented racist land-owners like Harry March, played by Ewen Leslie. Indeed he is equally lost in the foggy wilderness of class after his muted return from overseas fighting for his beloved country.  His mind is gone and no one is safe.

This film will tempt you to think about where Australia has come from and where it is going.  It will tempt questions about what has gone before, and what motivates the present government with its treatment of our indigenous countrymen. “It is a place where Indigenous, and non-Indigenous people push against each other like tectonic plates. It is a clash of cultures, ideologies and spirits that still continues today from when the colonisers first arrived in Australia,” says Thornton.  Sweet Country is a powerful story, inspired by real events, told with heart and passion. Sweet Country will treat you with magnificent landscapes, beautiful scenes of dusty escarpments, salt lakes, and stormy skies like no other country. Sweet Country will also kick you in the nuts.